The World Boxing Council (WBC) rewarded Eng. Carlos Slim Helú Man of the Year 2008, recognizing his support to the professional and amateur boxing by means of Fundacion TELMEX and  Instituto TELMEX del Deporte.

Last March 3rd 2009, Jose Sulaimán, President of the WBC, awarded Eng. Carlos Slim in Mexico City in a very emotive ceremony. Eng. Slim received the green and gold belt, a special belt only granted for World Champions of the ring and for important figures of different spheres.

Eng. Slim also received as acknowledgement the Aztec Calendar as well as the Council’s Resolution signed by the 10 presidents of the world confederations affiliated to the WBC.

During its speech, Mr. Sulaimán recognized that this is a worthy acknowledgement for a brilliant, kind-hearted businessman as he is always helping the sport ambit, specially boxing and thanked him his unconditional support to promote this area.

“We have never seen so many champions and former world champions together in the same place; perhaps this will never happen again; this event deserves the presence of people like you. Carlos Slim is not only an admirable businessman but a marvelous human being, with a philanthropic view toward the humanity and a personal philosophy to help and promote sports and education”, affirmed Jose Sulaimán.

Eng. Slim pointed out “Thank you so much for this acknowledgement, this exhorts and committed me to keep working”, and added “in Mexico we just reached 100 box world champions, it is incredible to have so much champions, just as our Olympic medal winners, this people are examples  of will, sacrifice and wholeness”.

The Men of the Year award was first conferred in 1963. 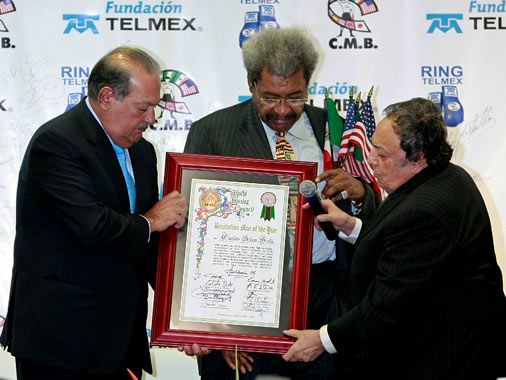