The Embassy of Lebanon in Mexico awarded the National Order of the Cedar in Grade of Grand Officer to Carlos Slim, on November, 2008.

Nouhad Mahmoud, Ambassador of Lebanon in Mexico, awarded the medal to Mr. Slim and indicated that “the reasons for the conferral of this medal are innumerable. Don Carlos is our world man of this time". He also said that "his philanthropic character committed with the welfare of human beings in general, has changed the lives of thousands of families, by spreading hope and joy within many souls".

After receiving the medal, Mr. Carlos Slim made a speech: “For me it is a great honor and I am very glad to receive this undeserved award, such a valuable decoration for Lebanon.”

“However, I think I receive it in memory of my dad, who came from Lebanon in 1902, when he was 14; and, as many other immigrants, he learned to integrate and love Mexico, but at the same time, he knew how to keep his love for Lebanon, which was in a very difficult situation at that time”, he said.

“We are gathered here tonight to honor a great man, one of us, a man that with his tenacity and constancy, showed to the world a professional capacity and an extraordinary vision to reach great economic achievements.  His philanthropic character committed with the welfare of human beings in general, has changed the lives of thousands of families, by spreading hope and joy within many souls.

Our Mexican-Lebanese community has particularly enjoyed, many times, his significant contribution in charity and humanitarian projects.

The restoration of Mexico City’s Historic Center is a sign of his altruism and of the magnitude of his contributions for Mexico’s national life.

When the destructive and bloody war of Israel against Lebanon on the summer of 2006, Don Carlos demonstrated his great worry and consideration for the situation and urgently and efficiently offered all the possible humanitarian help to the needy victims in Lebanon.

In the former school year, thousands of Lebanese students, received from the Carlos Slim Foundation, hundreds of computers at their public schools in towns of different regions of Lebanon.

I know it is not fair to limit Mr. Slim’s humanism with examples that do not illustrate the magnitude of his generosity and solidarity through the different Foundations of Grupo CARSO, but we all know of the goodness of these donations.

Carlos Slim is a man to be listened and followed, always with a more humanist and inclusive vision for a more equitable distribution of wealth and that it generates greater benefits for a vibrant economy that reduces the number of deprived and responds to those who need more”.

I would be brief but it is not easy for me or any other, to resume in just a few words the attributes of such an admired man, with such an interesting pathway, but I know that Don Carlos is a modest man and modesty is an attribute of the great.

As a Lebanese, I feel proud to have a compatriot of such dimension, as well as millions of Lebanese and their descendants dispersed around the world, which have in their common conscience the idea of identifying themselves with this human and economic phenomenon, always with the human race as the object of his affection and care, without condition or reserve and without depending on the fluctuation of the stock exchange.

Many people wonder on the reason of the delay to award this medal by a President of Lebanon.  The reasons to award it are innumerable and our country keeps giving to the world leading figures with international dimensions as an answer to its marginalization and victimization.  We are proud of all of them and Don Carlos is our world man of this time.

The delay is due to the fact that each president wants to have the pleasure to personally present this medal to Mr. Slim, but the situation in Lebanon has not allowed it, so it corresponds to me to finally present, with great pleasure and as a great privilege this symbolic award from our ancestor’s country, a medal we requested a long time ago.

We always hope to have the pleasure to receive Don Carlos Slim Helú in Lebanon in the near future.  I also inform you that the Municipal President of Jezzine has contacted me to express his interest in establishing direct communication with Mr. Slim, as in Lebanon they have many ideas to honor him properly, an particularly in his grand parents’ town of birth.

Congratulations Don Carlos, we wish that through your great human quality and admirable personality you continue to achieve the levels of accomplishment and success that have been so good for the welfare of the society.” 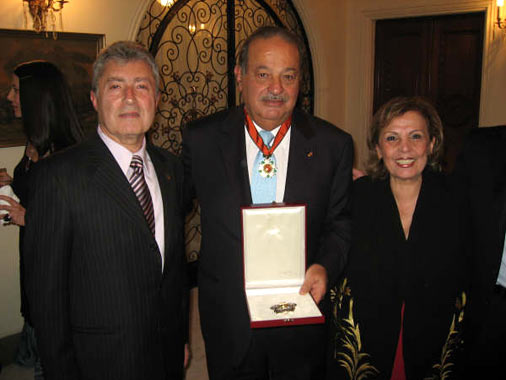